Well, it would seem that I'm just about there and would have to say that I've enjoyed the journey and also enjoyed writing this up a couple of times a month.  This started out as a simple solution to store pictures and notes related to the project and really only for my own use.  It finished up as a fully blown blog with in excess of 60K views over the duration of the restoration and regularly hit 4000 views a month which was surprisingly satisfying.
It has also had some interesting side effects.  The Jaguar Drivers Club discovered it and asked me to produce a series of articles to run in parallel with the blog, the final part being in last months JDC magazine.  This led on to the XK Gazette asking if I would do a much longer series, perhaps over 24 months, each with around 10 pictures and 1500 words.  The fourth part of that series will be in the October Gazette.  I suspect to encourage me onto greater things they also suggested that the Gazette series could be the basis of an XK restoration book to be published by Porter Press and sure enough that did appeal to my vanity but I really would expect some proper remuneration for my efforts if that most unlikely of events ever actually occurred.
The blog was of course written in real time and I only really needed to remember what I did last week or so. The Gazette series is about 20 months displaced and I would have to say that without the blog, it would be an impossible task.
I have also had many interesting email discussion on many aspects of the project.  It was just a shame that the comments part of the blog proved unworkable and had to be turned off due to the continual stream of totally unrelated rubbish received.
The benefits of retirement are very slowly starting to materialise.  For the time being I will hopefully retain my workshop at my old business premises but as the months go by I seem to start later and finish earlier and because today was wet and cold, I decided I would just take the day off.  Disgraceful!

For years I've looked for the ideal receptacle for the tools and spares that really need to be carried when your out and about in a fifty year old car.  I've invariably finished up with some horrid plastic B&Q tool box which has absolutely no place in the boot of an XK or any other respectable classic for that matter.  I was therefore quite pleased to come across an almost ideal old leather bag with all the right bits inside to retain safely and accessibly everything I normally carry.  It needed a bit of work and a few alterations to make it perfect and I lent it and its contents to a stranded C type replica owner at a recent show.  Upon its return he commented that more people asked about the bag than the car!  It goes into production in around a months time and with any luck I might even have the first batch available for Christmas.  So if you see a super posh and brilliantly practical tool bag advertised in the classic car press late this year or early next, you'll know the story behind it.


As I've said before, I will write up the full explanation and outcome of the electric water pump conversion, the totally outrageous but well hidden audio system and any other items of interest that occur during the winter months.  All will eventually, god willing, appear in the XK Gazette and I should think that a fair proportion of you who follow this will also take that publication.

So that it for now.  No more regular fortnightly updates.  Only an occasional post when there really is something worth writing about.

The UK classic car rally scene is in full swing with quite literally a choice of events every weekend and for once, the weather has been glorious, almost every day since the beginning of July.  The 120 has won some sort of prize wherever its been in spite of the fact that my list of 40 plus jobs to totally finish it has not really diminished.  Of course, these are all quite local shows where cars are judged on their appeal, for example a vote by the public for the car they would most like to take home.  With no hood, spare wheel and original tool roll, a proper concourse judge would have dismissed it out of hand.  Unfortunately the change to non optional wire wheels (in 1950), lack of spats and a plethora of stainless fasteners will still exclude it from real concourse competitions even when the job list reads zero.

JDC member Nick Evans snapped me arriving at Raby Castle and couldn't resist putting the picture forward for a caption competition.  My entry is:

With something approaching 800 miles completed, I'm pleased as punch with the way it drives, the engine and drive train are super smooth and having finally sorted the wheel balance issue (I think more by chance than science) makes it a very relaxed high speed cruiser.
It's always difficult to establish just how good a home-built car actually is because we work mainly in isolation.  I suggested to fellow 120 roadster owner Tony that we swap cars for a twenty mile thrash over the North Yorkshire moors and he agrees that it would be an interesting exercise.
Arriving for lunch at a remote country pub located at a not very busy road junction (we saw one car and two tractors in ninety minutes!) we sat outside in the sunshine and compared notes or rather we didn't.  It transpires that neither of us could honestly differentiate between cars,; they felt virtually identical.  All the more remarkable because Tony's has a rack and pinion conversion and mine a disc brake conversion.  Very gratifying.

Tony finished his 120 a few years ago, has spent quite some time refining it and I've been lucky to benefit from his experience.


It recently dawned on me that I haven't  posted any proper pictures of the car in its 'cosmetically' finished state so here's the usual selection. 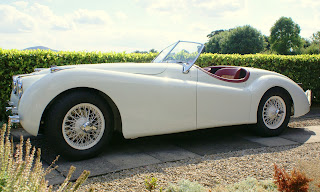 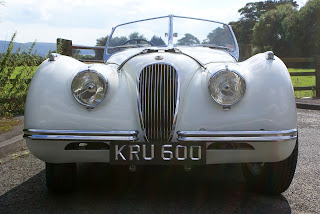 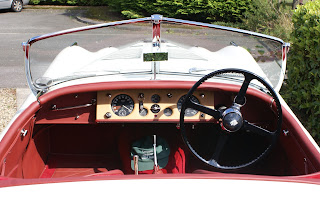 I do have one problem which may be resolved in time.  It makes me feel dreadfully ostentatious; possibly down to the the really shiny white finish coupled with the white wheels.  Oddly, the 140 fixed-head has always felt like a cool car but the 120 feels so much different.  My daughter who is usually right about such things tells me I'm simply too scruffy and ancient to be ostentatious and should stop worrying about it.

I know I've mentioned before that back in the late seventies we lived next door to the Mooney family in County Durham and their son Aidan (now just Dan) moved to Texas in 94 and now runs Classic Jaguar in Austin. We've remained firm friends throughout so it was great to have Dan and wife Justine stop with us for a couple of days.  It did turn out to be a bit of a bus-mans holiday for Dan as we did a tour of the area looking at various Jaguar and XK related projects. 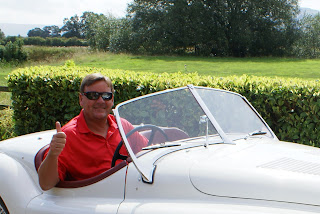 One port of call was the result of a most remarkable series of events.  A former business partner took six months holiday a couple of years back to ride his BMW bike from Alaska to Argentina.  A year or so later he attended a reunion in the Midlands and in conversation it emerged that another biker (from a different trip) was the owner of an un-restored XK120 roadster.  It further emerged that he apparently lived less than three miles from me - ridiculous!  Unfortunately the exact detail was lost in  the usual alcoholic haze of such events and after a while I did wonder if he'd dreamt it.   At our JDC annual event in mid August, (see first picture) the owner of said 120 introduced himself and sure enough lived just up the road.  You couldn't make it up!


Dan and I took the opportunity to call by and I took the liberty of inviting the other two very local 120 roadster owners, Andy and Tony,  This makes four cars, all within a few miles of each other; possibly the highest concentration of 120 roadsters in the world?  This particular car came from the states and had already had a good amount of work done when Ed bought it around 10 years back.  Looking after his collection of other cars and bikes has taken precedence to date but now encouraged by the newly formed North Riding of Yorkshire XK120 Roadster Owners Club it may finally be the 120's turn.

Next port of call is longstanding friend, marine artist Pete Baker.  Pete has owned his Alvis for more than forty years and I vaguely remember assisting in the fitting of its ex Bentley body just after he bought it.    Dan as ever is immensely enthusiastic about this wonderfully patinated old war horse of a car and is treat to the customary jaunt around the North Yorkshire dales.

Miscellany
Whilst on the subject of things you couldn't make up, here's another.  I attended the two day Croft Revival meeting at the beginning of August and on the first day met a very tall and dignified gent by the name of Jimmy Blumer.  Jimmy was a local 50's and 60's motor racing legend competing in Le-Mans, the Monte etc and raced with all of the glitterati of the period.  He told me he had once owned, raced, hill climbed and rallied a 120 roadster from 1954 to 1957 and only sold it because it was completely knackered (worn out).  He easily remembered the registration number and that evening I put it into the XK Data web site.  Not only was it still around but had recently been for sale, with the comment that it's history prior to the last two owners was unknown !!!
I actually found and printed off a copy of the add and met Jimmy the following day.  He was most perturbed that the original silver metallic light blue colour had been changed and was puzzled that it's early competition history meant it would actually add a premium to it's value, commenting  "to get the best possible price, we always sold our cars with the strap line never raced or rallied"
In spite of some extensive research, it seems that this car has gone to ground again, but it would make a great next project if I could locate.  This time I would resist the temptation to change anything and really would restore it to its precise original condition, spats and all.