Some considerable research has gone into establishing the paint finishes originally used.  Whilst it would be good to maintain this originality, the predominant consideration has always been to ensure a long and rust free future.  I've had a good deal of discussion with Alex, the man responsible for the bodywork and paint and we jointly concluded that a number of different finishes / processes would best achieve an acceptable compromise.  This did become a little complicated resulting in the production of the inevitable list.


Seams
All to be washed in or beaded.


Black Stone-guard where accessible.   Wax-oil after final paint
Dash Side strengthener Frames
Front part of A Posts
Rear of B posts, drill and plug closed box after wax-oil injection
Inner side of splash panels
Inside sills including top section


The final decision on colour was made by simply looking at modern cars and choosing a similar creamy white that I think looked something like the original, which is described on the Heritage Certificate as Cream.  This is contradicted by the first owner, Vernon Maitland, who is very definite that it was in fact white.  According to Urs Schmid, Old English White / Cream was not a standard colour until December 1952 but the Cream / Ivory available up to that date is nowhere near the cars original colour so I can only guess that it was ordered in special colour.  The obvious question at this point is how do I know what the cars original colour was?
Before the car was taken back to bare metal absolutely everywhere, I removed and retained the cover over the fuel filler cap and carefully sanded it back to reveal the cars paint history. 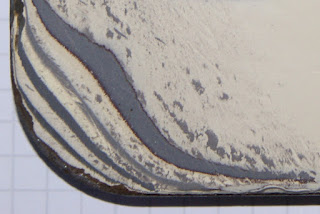 The consensus is that the cover (and presumably the whole car) has been repainted three or possibly even four times but always exactly the same colour, most likely Old English White.
Considering it was incontrovertibly only on the road from 1950 to 1965 this is remarkable. The last owners business was the supply of equipment and spare parts to Automobile spray shops which may or may not be relevant.
I will have the fuel filler cap cover finished over the previous layers of paint so that some future owner in another fifty or sixty years can have the pleasure of uncovering its paint provenance, probably using the accelerator mass spectrometer / carbon 14 dating app on their mobile device!


Its impossible to accurately show these colours on computer screens, which just add to the differences in camera translations, reproduction and printing processes.  To entirely bypass this I first took a swatch of the Fiat Bianco colour to the powder coaters and had them paint a sample piece of tube which I then checked against an actual car.  Very very close, and as the wheels are separated from the body by the tyres, you'd never detect the difference.  I will have Alex do the same with a two pack paint sample checked against the same car, and again once the whole batch of paint has been mixed.

I'm probably a little over obsessed with this colour issue but this is partly due to my 140 being painted in a slightly different and unusual BRG 'hue' than I intended.  Entirely my decision / mistake, but it's delicate olive shade has solicited a good many surprisingly positive comments - or are they just being polite?

Tuesday 4th September - ENGINE START UP DAY
With everything checked and double checked and my order of 15 litres of Millers SAE30 Running In Oil arriving this morning, it suddenly dawned on me that the moment had arrived, nothing left to do but push the button.  I will cover the run up, the 'event' and the outcome in some detail in my next post.

The Eskdale Run - Sunday 3rd September.
This is organised by Teesside Yesteryear Motor Club (TYMC), the club that Jeremy Clarkson had a pop at a couple of years back, on his sometimes entertaining but mostly repetitive Top Gear show with the comment :
"How much do I not want to go out to dinner with anyone who is a member of that club.”

Starting in Teesside the Eskdale takes in some of North Yorkshires most magnificent moorland / dales scenery with a lunch stop at Grosmont, the Moors Steam Railway centre.  Hugely popular, it is invariably over subscribed and is generally scheduled to coincide with the best showing of Heather on the more remote moorland slopes.

A great day out for enthusiasts, with cars from the early 1900's to modern classics, and everything in-between, plus an amazing bunch of extreme hard core Classic Motorcycle guys, probably unique to the UK's North East. 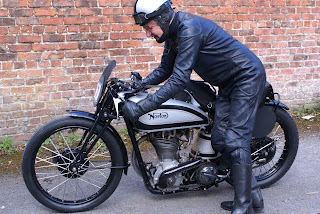 Don't know about Jeremy, but this is just one of a whole lot of TYMC members I woudn't mind having dinner with.  Bill Taylor bought this fantastic 1935 Type 40  Racing Spec Norton International when he was a teenager.  Circa fifty years later he still push starts it (no kick start) before embarking on a 100 mile blast.  The open exhaust 'blat' will have certainly curtailed a few Sunday morning sleep-ins.