My main task for the month is to finish the electrical work which I thought would be fairly easy, but it's going rather slower than I had expected, partly due to the large number of alterations and additions.
As mentioned in a previous post, I've replaced the Lucas dynamo with a Dynalite alternator which looks almost identical.  Producing 40 amps, it is a considerable improvement on the dynamo output of 25 amps and will also start charging at a much lower RPM.  However it still falls quite a good way short of a modern car alternator at 70 to 80 amps output.  This would not normally be an issue with a fifties car, but given the amount of junk I've added I need to be aware of it's limitations.
Take for example, theoretical power requirements on a very cold and wet night - Essentials first :

Add in 8 Amps for the radiator cooling fan (unlikely, but possible if stuck in traffic) and we are on, or possibly over the edge. With 80 amp hours of fully charged battery capacity and an 'off' switch for the heater fan, not really a worry, but not a good idea to turn on the spot lights, another 7.5 Amps.  The music system (at full whack a potentially massive 20 plus amps) is definitely out. Other odds and ends like phone charger, instrument and map reading lights (or sat-nav) are negligible, but it all adds up.

All of the push in type bullet connectors which are the source of endless problems after a year or two are being replaced with fully soldered joints.  Other terminations used are screw type terminal blocks in enclosures and modern high quality multi-way connectors to connect the dash-board, the small ancillary switch panel for indicators / spot light switches, and the switches and other bits hidden away in the central arm rest.  The plan to ensure none of the additions are visible seems likely to be realised.

One wiring job I've not been looking forward to is the mess of cables and connections around the Voltage control box.  In addition to the very stiff and awkward original looms there are another twenty odd cables (immobiliser, indicators and new hidden fuse box feeds in and out, of varying gauge) which need to be terminated but all out of sight.  The key to a reliable termination for the RF95 control box and other screw down terminals is having unstressed cables which don't rely on the screw to hold them in place but sit naturally where they need to be.  It takes a good deal of time and some stripping back of the original looms outer cotton covering to achieve this. Even with the utmost time and care, I would have to say this is not a happy arrangement.

Back in the early ninety's car theft in the North East of England was endemic, with joy riders stealing anything that was not reasonably protected from theft.  After-market car alarms and immobilisers were big business but their design and installation often left a great deal to be desired.  Trac Communications designed and manufactured one of the better products using a newly developed fob which transmitted a code into a receptor and then to a processor which in turn opened or closed a couple of relays usually feeding ignition and fuel pump circuits.  Certainly possible to work around by a clever lad with plenty of time and a good knowledge auto electrics,but sophisticated enough to stop 99.99% of half wit twoc'ers.  The product was picked up by the UK's biggest car security and  immobiliser company at that time.  Trac manufactured them on their behalf and did very well out of it.  Eventually it became the norm for manufacturers to fit their own devices to all new cars and production ceased, but a small stock of a few hundred were retained as spares / replacements but never used. Since then I've fitted one to every classic I have owned and given quite a few to other classic owners.  100% reliable, they will certainly stop an opportunist thief which is probably the most likely sort to nick your classic.  Needless to say, one is secreted within the innermost depths of the 120 with its confusingly identical mass of black unmarked cables.

Slightly fanciful, but I came across this image by accident and couldn't help noticing the similarity in shape. 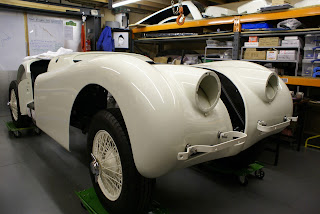 Next Post early February
Posted by Bobs XK120 Restoration at 13:17

This part of the restoration is most closely related to my daytime job as a Communal TV systems Engineer.  Much easier in some ways because I'm simply dealing with 12 Volts rather than the losses and gains of various cables, amplifiers, switches etc. all at varying frequencies.

Batteries
The starting point for any automotive system has to be the battery and I have chosen to retain the original location but use two 12 volt batteries in parallel rather than two six volt in series.  Two advantages - a saving of around £100.00 and a gain of 30 Ampere Hours.  As long as they are the same and ideally both new and connected with very short fat cables, the problems associated with batteries in parallel will not be an issue. I purchased two Type 202 (the same number is used by most manufactures, Lucas, Varta etc.) rated at 40Amps and 350Amps Cold Cranking which when doubled should be very adequate for a 3.4 motor.  They sit a little lower than the original batteries but amazingly, the retaining bars are a perfect fit


Ancillary Systems
The list of additional and upgraded electrical items, I will readily admit, has got out of hand, but reviewing it, there is nothing I want to omit so I just need to get a handle on it.  Having spent many hours over the years producing schematics and circuit diagrams, it's second nature to draw up exactly what I require.
It's an interesting exercise and and I should point out that it is still a work in progress but is now pretty close to how it will finish up


Ancillary wiring harness
Rather than add wiring on an ad-hock basis, I made up an additional wiring harness incorporating every additional cable, and all to be kept out of sight.  This was eventually achieved by laying out the complete set of cables on the floor and first wrapping them in PVC loom tape, then cotton tape which looks very original.
Alternator / Ammeter mods
One slightly tricky area to address is the problem of modifying the charging and power circuits to accommodate an alternator and still have the ammeter register both charge and discharge.  For obvious reasons, the starter motor feed is far too heavy to pass through the ammeter.  This in turn means that an additional heavy terminal is required for all power requirements except the starter motor.  However, if a gear reduction starter with internal solenoid is used, this effectively frees up the second heavy terminal on the original solenoid which is ideal for this purpose and is also in exactly the right place.

It is of course necessary to disable the solenoid and I achieved this by simply drilling a small hole through the hand operated 'plunger' and fitting a split pin.  The solenoid's starter terminal is also redundant because the feed from the starter button now goes directly to the new starter motor.

Halogen Headlights and relays
The next upgrade to deal with is the wiring requirements for halogen head lights.  Optimum performance is only achieved if they are served by their full design voltage (typically 12.8V) and light output diminishes by a factor of 3 with a reduction in that voltage.  For example, a 10% reduction from say 12.5 Volts to 11.25 Volts will reduce brightness by around 30%. (from approx 1,500 lumens to 1,050 lumens for a 65 watt rated main beam filament) which is probably only slightly better than a new original tungsten bulb.
The 120 power supply to the lights takes a fairly circuitous route from the battery.  Through the ammeter, then the voltage controller, light switch, dipper switch, fuse box and various nasty interference fit connectors, so the potential for high resistance and subsequent voltage drop is pretty good  (I would not be at all surprised to see one to two volts disappear on route).


My solution (hopefully), is to use the original wiring to switch a relay located close to to the headlights and fed by a heavy (27 Amp) wire direct from the battery feed terminal on the solenoid.  This should pretty well ensure that the halogen lamps are always fed by something closer to the full battery voltage, or even the slightly higher alternator output voltage.  Taking this feed through the ammeter again would rather defeat the purpose, so I just need to be aware that the headlights will not register a discharge.  Strictly speaking, conversion to an alternator means that the ammeter is now semi redundant anyway, and a discreetly placed volt meter will give a better indication of system performance and health if required.

All of the above have been tried and tested in previous projects, but that doesn't mean that there is not an error in the drawings at this stage.  Only when the  it's all up and running will I be confident enough to suggest that it's 100% correct.

Miscellany
This post should have appeared around the 2nd of January but a series of events prevented that happening and subsequently caused me a great deal of hassle.  It started with me being unable to add pictures to this blog on my PC at home using the Internet Explorer browser.   I could however add them using an office PC which used Firefox.  I attempted to download Firefox onto my home PC but in spite of all manner of Anti-Virus Software it was quite literally Hi-Jacked / redirected by a nasty bug browser called MyStart by Incredibar, apparently a product of Perion Networks Ltd.  Reverting to Internet Explorer, 'incredibly' it had replaced that also, but did not appear anywhere in my lists of programs when I looked for it to remove.  This rubbish browser with endless pop up adds also suffered from the same issue re. adding pictures to this blog, presumably due to some change made by Google.  Consequently, on my home PC I seemed to be stuck with it.  These people at Perion are obviously very clever to be able to do this, but also incredibly stupid to allow this to sully their reputation (assuming they have one of course).  Not as stupid however, as the companies who presumably pay to advertise (or do they?) and by association will be universally despised along with Perion.  Ironically, using their browser I find a mass of posts all relating to this issue and all very cross.  Perion appear to be an organisation of some substance.  If they are in fact linked to My Start and can only get their products onto your PC by the use of malware, then I fear for their future - or am I being naive because this is the future?
One of our clever lads at work found and removed the horror without too much trouble so things are back to normal (unless MyStart Inrcedibar / Perion Networks Ltd knows better!).  I do take some comfort from knowing that approaching 5,000 people (assuming Googles Stats are to be believed) will have read this by the end of January